You are here: Home > Covid-19 > SME’s with four or less employees are most at risk for payment default

Today, Experian releases updated findings from a sample of small- and medium-sized enterprises (SME’s) in the Netherlands, which reveals that credit scores are continuing to decline and expected default rates among various company sizes and sectors of SME’s are rising. Companies with four of less employees make up 93% of all companies in the Netherlands and Experian’s newest data reveals these small businesses with 1-4 employees, are most at risk of increased payment defaults and eventual insolvency.

In the company’s 2020 findings, Experian indicated a downward shift in credit score stability and a possible delayed onset of bankruptcies as government funding to SME’s begins to decline over the calendar year. Over January-March 2021, Experian finds a more pressing concern for the future health of SME’s in affected industries and the need for a deeper look at how lenders can assess potential risk among the smallest businesses that play a vital role in the Dutch economy.

The key takeaways from Experian’s data in Q1 2021 are: 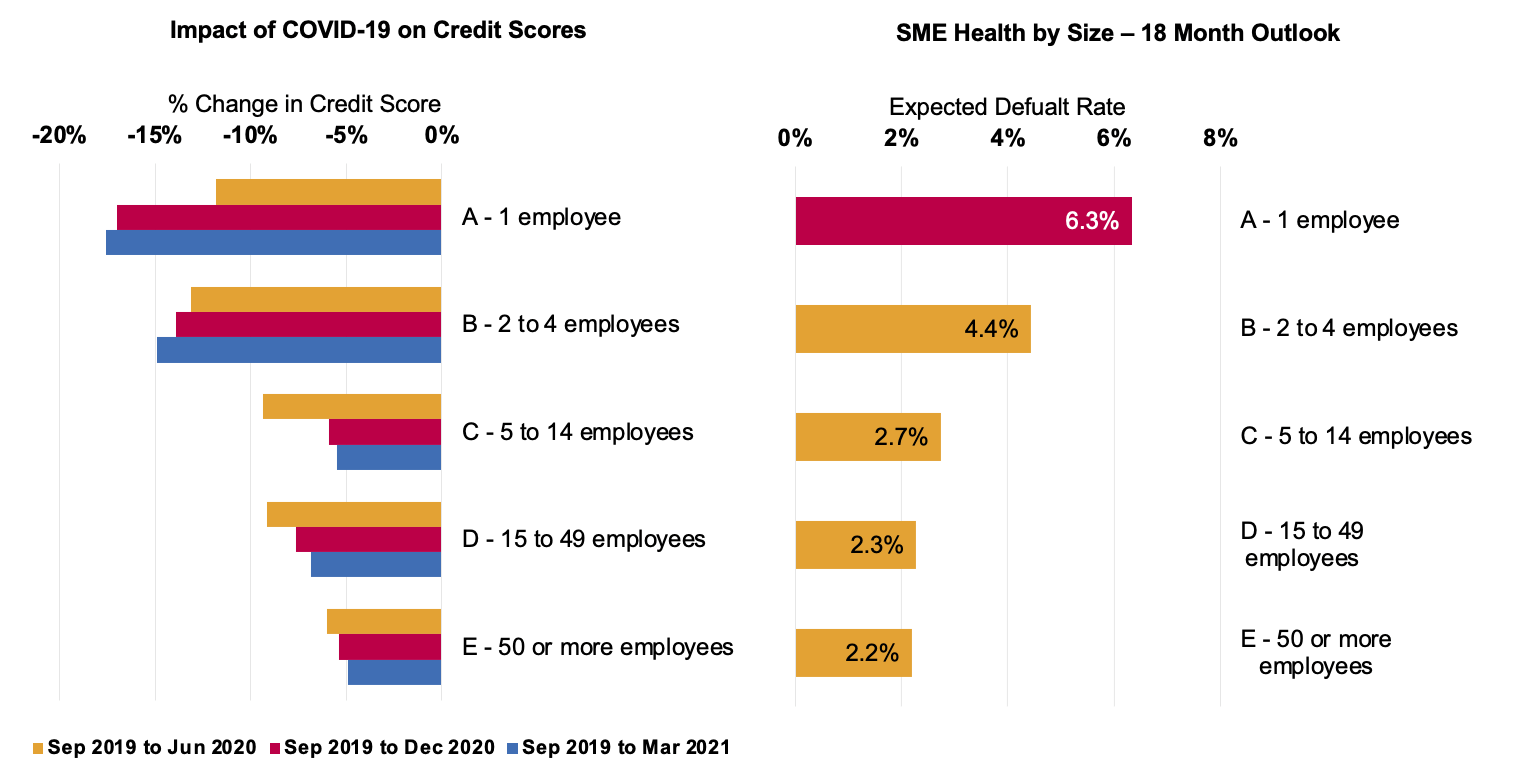 Figure A (above, left) shows SME health by size, indicating the percent change in credit scores over 2020 and through to March 2021. Figure B (above, right) then shows the expected default rate per size over the coming 18 months. From a company size perspective, SME’s with four or less employees are declining in overall health, while the outlook for larger SME’s is improving.

According to the OECD (Organisation for Economic Co-operation and Development), “SME’s are overrepresented in the sectors most affected by the crisis”[1] and this means that the impact of COVID-19 remains highest for small business owners as we continue to ride the wave of lockdowns in the Netherlands and across Europe. The OECD considers SME’s to be the most important form of business within the EU.

“Most notably this quarter, we understand that a large portion of the SME sector in the Netherlands is at high risk of payment default based on the scores and expected default rate within the next 18 months,” says Herman Peeters, Principal Global Consultant for Experian Netherlands, “The smallest companies are the most vulnerable to unpredictable closures and less financial options, which means that some are moving forward with voluntary dissolutions or downsizing in employees to support cashflow during these times. We expect to soon see a rise in insolvencies as we move through 2021 as well.”

According to CBS (Centraal Bureau voor de Statistiek), voluntary dissolutions have been on the rise as we moved through 2020, most notably among companies with smaller numbers of employees and sole proprietors. The choice to voluntary dissolve is a factor in the lower rate of bankruptcies seen over 2020. However, CBS has also seen a slight rise in bankruptcy claims among SME’s in March 2021 versus February 2021, indicating that financial support from government and other organizations is decreasing, and risk is growing.

Smaller SME’s also tend to have less financial backing and are more “financially fragile”[2] than larger companies, putting these companies even more at risk in their sector when crisis occurs.

“For financial institutions that typically lend to SME’s, it’s important to strictly monitor the client portfolio and assess for these areas of risk. By having access to real-time data insights – beyond traditionally used historical data – and by adding new data sources to existing risk models, lenders are able to have a much better picture of the financial situation of the company or customer,” adds Peeters.

Experian still anticipates additional business insolvencies and defaults as the first half of 2021 progresses and the expected pause or decline on government support occurs.

You may find interesting